Submit to your husband!   *Warning:  contains content that may offend*

Over lunch the other day my girlfriends and I were talking about some of our childhood programming – what defines us as good wives, mothers, friends and, ultimately, WOMEN. This group of ladies has been such an inspiration that I am sorting my thoughts out on what they thought and… I thought – what better place to do that than … well, publicly 😉

The conversation started innocently enough – It was a reference to being a “Proverbs wife”. For those who are unfamiliar with the phrase – it is a list of virtues, addressing everything from Faith to Beauty. Some of my girlfriends took it as a “to do” list of binding “shoulds”. I imagine that they saw yet another thing to add to society’s list of what the perfect woman is doing on a daily basis while crassly pointing fingers at the elements they were less strong in/ or areas where they had NO interest in occupying. We proceeded to get stuck (as many churches do) on the “submit to your husband clause”.

We were all raised by strong women and it is interesting to me the diversity around BELIEFS that stem from the same VALUES. i.e   I believe that strong (VALUE word) women submit to their husbands- (Belief Sentence)

*I THANK the women’s liberation movement for the right to CHOOSE to submit – rather than being forced.*

My Granny was a SUPER strong woman and my Grandfather loved her with all his heart; 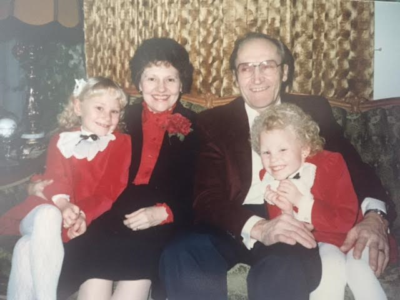 she often said he was the head of the household, BUT , she was the neck that turned that head. I remember her nattering on about ALL the things (bystanders would call it Nagging). She could be relentless – until Grandpa said “ENOUGH”,  then not another word on the subject was spoken – she would never utter under her breath that she would fix him later, she would not poison his dinner with scowls, she still brought him his Caf-lib, they still held hands as they said grace for dinner, he still kissed her and thanked her for the meal… and only after we had all been tucked into our Barbie beds would they address it again – quietly between the two of them. She often told me that sometimes she was right and sometimes she let him have his way. 🙂

This approach caused some confusion in my own marriage – I would push Mike to the brink of ENOUGH. I had not mastered life without bitterness, so I poisoned the moments that followed with glares, stares and backhanded comments. Then I would tuck our girls into their Barbie beds and come back to talk rationally. You can imagine the mixed messages and the utter confusion that I generously bestowed on him. During our calm conversation (at this point I was calm and he had shut off) I would say my peace and then tell him I would submit to whatever he decided. He truly thought I was bat shit crazy. – in his mind – if he didn’t do what I thought was the correct course of action I would condemn him to a life like he had experienced in the last few hours. (That, to my hearts dismay, was sometimes my intent.)

My point is that there is more to submission than an action – it is a Heart-space. Releasing  all bitterness and TRUSTING. I believe you have to be with someone who is trust worthy, and place yourself in the Heart-space of submission without bitterness – in my mind they synergistically work together.

I completely trust that Mike loves me like Christ loved the church, Mike would stand in front of a firing squad for me;  he loves and supports me more than anyone on this planet. He is my biggest fan.  He makes me coffee every morning and leaves it on the night stand so when I get up it is the perfect temperature (with my sensitive teeth) for consuming. He has put me on a pedestal – purchasing me a “muscle car” so I am taken care of, he never wants me to do manual labor (although I do it without complaining like it tells me to in Proverbs 😉 He treats me like a queen. I am his best friend, and he is mine. We trust each other with our deepest secrets and secret dreams. He tucks my feet in when we watch a movie together, he makes the popcorn the way I like, he pours my sparkling drinks so they are not-so-fizzy for me… He does a million different things to tell me he loves me, and I have grown to trust that love – so it is almost effortless to relax into his decisions when he says he believes something is the best for us. I still may have concerns that are voiced -not from a platform of mistrust but more from a sharing or “have you considered” standpoint.

Within this submission I am actually more free than I have ever been to explore what makes me happy because I feel safe under his protection – please don’t feminist slap me.  KNOW I don’t need a man’s protection … but,  boy, does it help me rest easy knowing I have it. You know when you walk into a club and your whole SQUAD is behind you – well, he’s my SQUAD. He moves the earth -literally sometimes- to make my visions come alive. I know if we have discussed something and he says the timing is not right- I completely trust him. I KNOW beyond a shadow of a doubt that he has considered my heart, our physical needs and our resources – time, currency and energy.

That brings me to a truly mental moment – because this is not something WE just decided to DO one day. It was created and it was earned. I didn’t start out feeling loved, so I did not submit. So, he refused to give me LOVE – I would stand in front of him demanding love without giving respect (because that had to be earned), and he would demand respect without giving love (because that had to be earned). Thus enters the mental spiral of the Mexican standoff. Both of us in our respective corners waiting for the other to make the first move. Terrified that if we expose weakness the other will exploit it, or worse, that we will remove the walls from around our defences and act in the good faith of love and respect, and it will not be received or reciprocated. 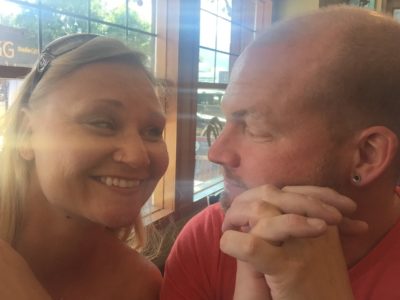 In the end it has played out like the lacing of our fingers … one act laced with another as we bring each other closer. I actually remember conceding to something I didn’t agree with, and I chose to trust him and, more importantly, NEVER hold it over his head if it didn’t work out. I believed that he believed this was the best and I chose to trust his INTENT. I can report that it didn’t go exactly to plan, and it upset him greatly. I think he was actually afraid to talk to me about it (speaks to my past approach to conflict). When we did finally did talk about it, he was surprised as there was no bitterness. I simply reminded him that I was in his corner and trusted his intent in all things. In the days that came after, he kept looking for me to hold it over his head – to return in bitterness and bossiness …. I let him down in this expectation – over and over again. As he began to trust my response, he began to act in love, I received bedside coffee and perfect egg white pancakes (my breakfast of choice), he would brush my hip as we passed in the hall and his goodbye kisses in the morning lingered a little longer than normal. … a lacing.

This is not the end of it. We still sometimes sit in our respective corners staring each other down, but I  continue to strive towards being a Proverbs wife.  It is not a measurement of judgement that I place on myself but more a vision of what I am working towards as I see a value that it has brought to my life and our marriage.

These are my thoughts from here, with all the wisdom and grace I can muster today with the culmination of MY life experience.

“And her children shall rise up and call her blessed…”  Proverbs 31:28…  Let’s face it, being a Proverbs Wife is not always realistic  😉