Recently I did a YES experiment.  (If you haven’t watched the movie, please allow a quick recap.) Jim Carrey, plays the role of a never up for a new thing guy.  He meets a girl who pushes his comfort zone; she challenges him to say yes to whatever opportunities pop up , and he ultimately says yes to some things that frighten him to his core and change his life and his direction. I was not looking for anything as cinematic as all that, but I knew I needed something to shove me out of my comfort zone.

I have been through seasons where I had to learn to say NO. I have had to do things to protect my “cup” so-to-speak. And in this season I needed to learn to say YES, even and especially to the things that frighten me.

Some of the things I agreed to were in my business.   I attended meetings that I felt under qualified to attend, I taught classes and coached people whom I felt I could learn from. But, I would like this post to be more personal than the “business side” of me.

I have had some health issues, and I have regressed into myself,  I have unearthed some unhealthy beliefs about food; while I have taught one thing I have exercised another entirely.  My battle with anorexia and food as a reward for punishing exercise returned with devil horns and a loud speaker . Ultimately  my self-care internally and externally has taken a hit. And I recognized that I would not get out of my funk alone. So, I asked my God that opportunities for fun and growth be revealed. I began to say YES.

When my friend called and said they needed two more players for ball hockey or they didn’t have a team and did we (yes WE, I volunteered my husband for my cause) want to play?, I said YES *while shaking my head NOOOOOOO*.

I have learned from ball hockey that: 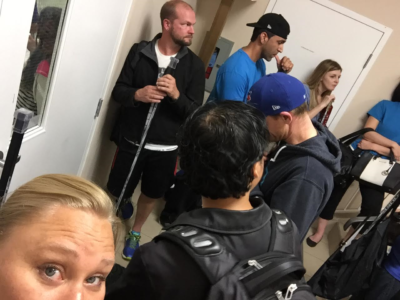 1) My friend grossly undersold the skills required for even a beer league. You should be able to shoot, pass and run.  If you can shoot and pass while running, I would appreciate some tips.

3) Always pack a Poise pad for when I run too hard.

5) I have no fear of hurting myself to save or block a shot.

6) I should have worn a cup the first game.

7) Mike says I cheated on him in the first game with another man’s stick. However, I don’t remember because I blacked out from pain. 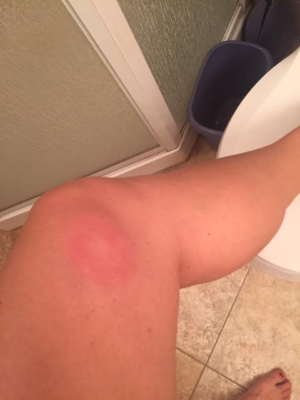 11) I sweat more than the average human.

12) Beer and wings should always and only be consumed AFTER the game, NEVER before.

14 )It’s fun to rope other friends into this commitment so that I don’t feel so bad about myself.

16) Mercy is a real thing – but even if we call it – we still keep playing until the time is up. – that is not what I assumed mercy to be

17) The “cardio cough” can last for up to three days after.

18) My decision-making authority has been revoked on all “fun activities” (as I define them) until further notice.

And lastly, even if we have nothing to say on the way there, we can’t stop talking and laughing on the way home.

I hope that before the season is over I can learn what it feels like to be part of a team that wins at least one game 😉 *update* we remain the UN – UN defeated (in total loosing every game that we played) We are so grateful for the experience … THANK you Scott and Jenna for inviting us. 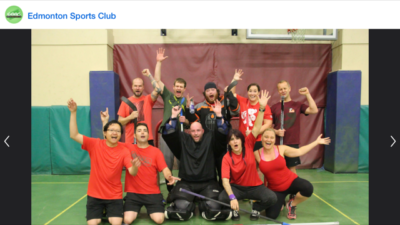 I went for lunch with another life friend of mine. She had NO idea about my internal challenge. As we spoke I was telling her that I was just looking for my routine, my niche…  my … “something”. She is an avid crossfitter (has been for as long as I have been a lifter) and the feud between “lifters” and “fitters” is a real thing.  We have all watched the videos on one side of the fence or the other. And when she said, “YOU SHOULD COME TO CROSSFIT!” I burst into tears in a public place. My commitment to myself to say YES ringing in my ears exposed a vulnerability that I thought I had buried for good.  And I asked her if she thought I would fit.  This makes me cry even now a little. 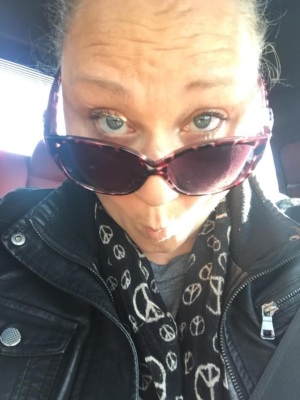 Let me explain: I’m odd … sometimes (most times) I don’t know where to put my hands or how to hold my face. I am the awkward person who holds the hug too long or doesn’t release the handshake; I am overly affectionate or cold and awkward.  For example this morning as I was leaning on the counter trying to “come onto” my husband and stand provocatively,  he actually asked me if I was ok because it looked like I was in some kind of pain or discomfort. (And he has known me for 25 years). My hand pits get sweaty and my lips curl down into a frown when I am nervous. I say awkward things and act like I have Tourette’s and that is actually just me. I have been told that I am actually quite fun to be around if you take the time to get to know me and don’t base it off first impressions. 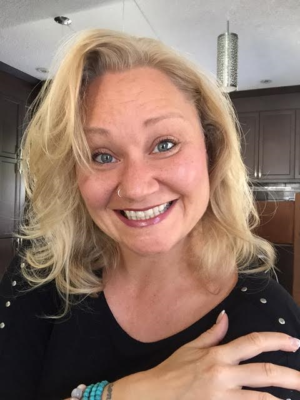 (Truly, someone I trust and love said that to my face – which is nicer than behind my back, I believe).  I have chosen lifting because it is an individual sport;  nobody has to like me.  I pay coaches and trainers to be with me, which takes some pressure off for me. My biggest fear is that I would walk into CrossFit and be the outcast,  that these “cool kids” would reject me and it would be Grade 9 all over again. I had met some CrossFit girls in the past and, don’t get me wrong, they are beautiful and we are friends. They judged my competing in physique competitions and made fun of the posing in my house,  saying that I had to show my V to the judges to win. (Maybe that is why I’m still after my pro card). Now,  I have made fun of CrossFit in the past, too, and I also felt like saying yes was betraying my competitive “fit family” But, in the middle of Oj’s I decided to face my fear and say YES. It took me a week to follow through,  and I used up all my excuses for not being there, my favourite being that my eyebrows were in need of washing and that it would take all day. 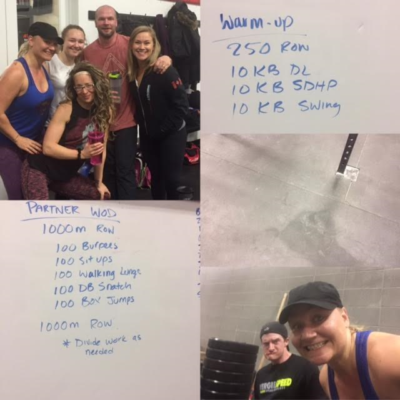 What I have learned from CrossFit:

1)      Explosive movements with my injuries frighten me.  but I am getting stronger and more confident every time I go.

2)      The coaching is great and they have been sticklers for form (maybe this would be different if I wasn’t body aware, or a trainer – but what I have witnessed has been wonderful).

3)      Everyone is there at their own level and is encouraged to challenge themselves wherever they are at.

4)      When they do fail at form they laugh at themselves, screaming CROSSFIT – which I did recently at the gym and it did not generate the same laughs. Apparently screaming GOODLIFE is not received the same

5)      I need to pack Poise for when skipping/ box jumps or any exercise is listed on the workout of the day (or WOD).

8)      There are girls there;  they do girl things, like talk in groups without me, which is not necessarily about me (and even if it is I have realized that I don’t care).

9)      I am there for my own reasons – to incorporate exercise within an encouraging community and I receive that in the moment for what it is.

10)   I still don’t know what a “snatch” or “kipping” is (outside of the phrases that I have made fun of, and used inappropriately). 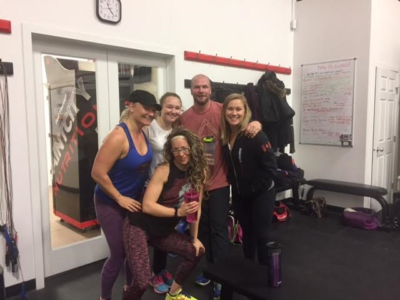 This blog is partially a confession, so I can feel like less of a betrayer to my lifter family, and partially an encouragement to move past your comfort zone.  Those things that hit you in your solar plexus, go do THEM!!  I did, and I have had so many laughs and made so many new friends and found new avenues to express love, I have been stretched and I have grown. And this post is also a declaration. I will continue to do the things that serve me in my health goals, I will continue to push past the comfort zone and into the growth. Thank you Skyla and Nicole for always inviting me.